Lighten up your favorite shrimp alfredo recipe with this easy zucchini noodle twist! Ready in 20 minutes and under 400 calories! This post contains affiliate links: if you buy something I'll earn a small commission at no cost to you.

This post is sponsored by my friends at Wild American Shrimp. 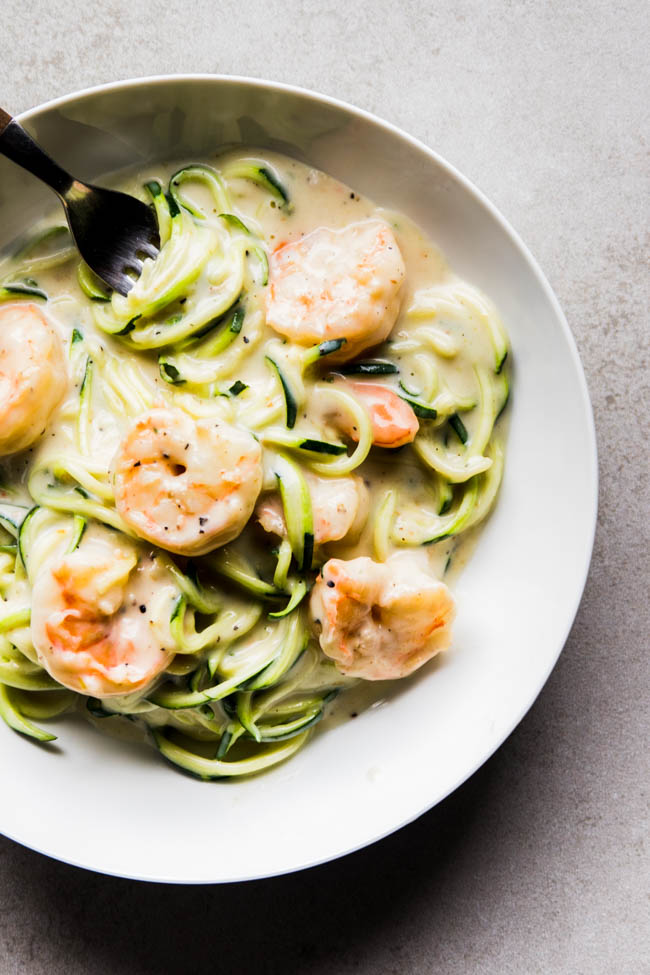 I am officially ONE HUNDRED AND FIFTY PERCENT on this zoodle noodle bandwagon. 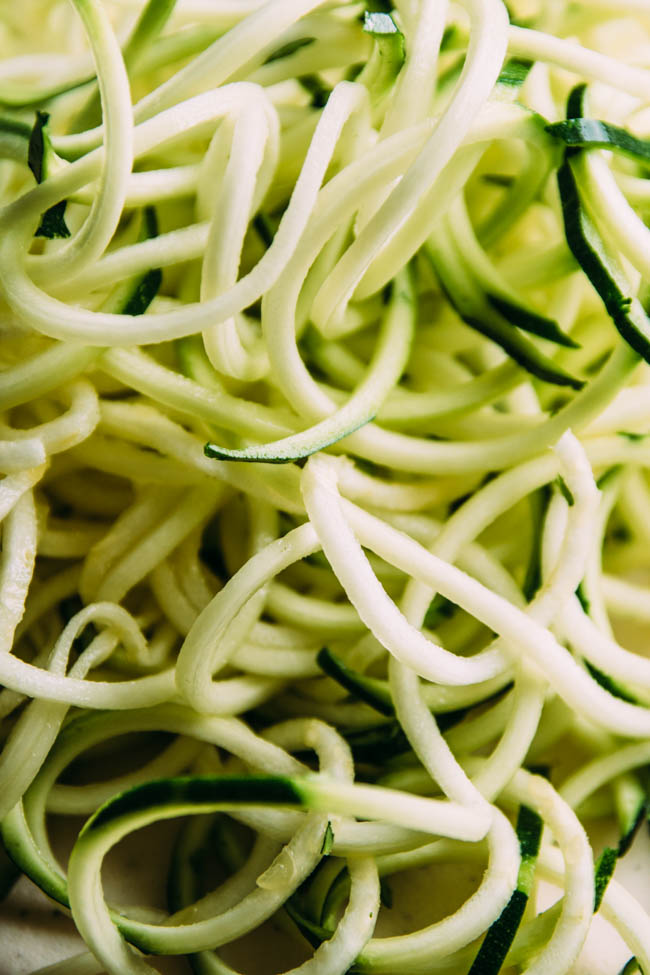 I've been a teeeeensy bit obsessed with zoodles (that's short for "zucchini noodles," if you're like me and exactly zero percent hip to anything. I may or may not have had to Google it) ever since I caved last year and finally bought a spiralizer.

And okay, I'm usually vehemently against any kitchen products that have just one use, but honestly? This spiralizer is MAYBE the best thing I've bought in years. Pasta and I are basically soulmates, so the fact that I can "eat spaghetti" without actually, you know, EATING SPAGHETTI is kind of amazing.

But let's talk about this shrimp alfredo recipe! 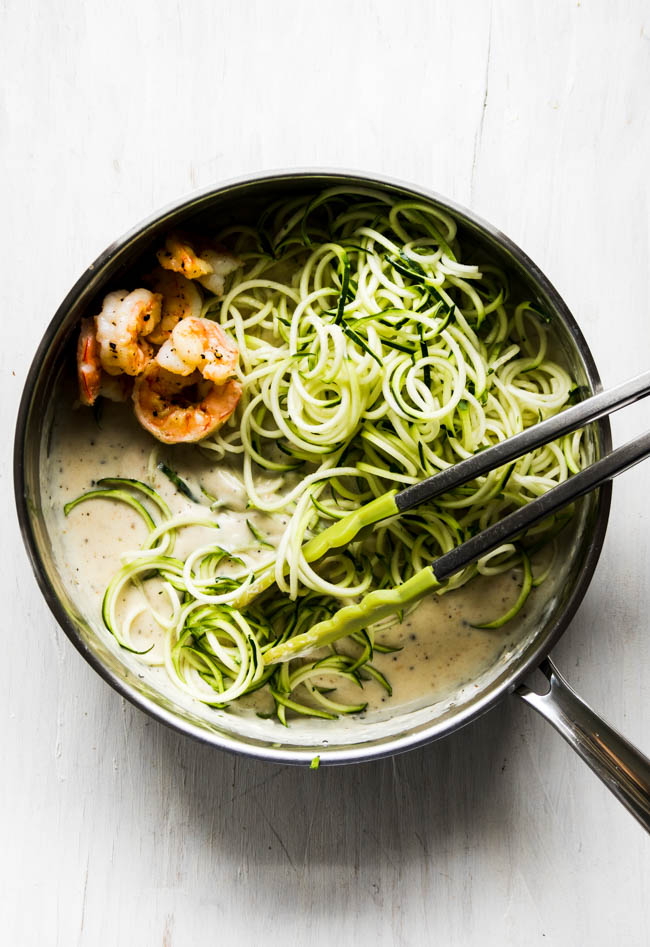 Since I jumped on the zoodle-noodle bandwagon, I've stuck mostly to lighter sauces like pesto or a quick bolognese. But it was really only a matter of time before I gave it a whirl with something cheesy. Liiiiike, for example, this garlic parmesan cream sauce (<-- because OMG).

I was a little on the fence about whether zucchini noodles would hold up to a heavier sauce, but these vegetable noodles DID. NOT. DISAPPOINT. The zoodles stayed firm and twirl-able (which, twirlability = 90% of the fun with real spaghetti, yes?) and kept this heavier sauce feeling light and summery. 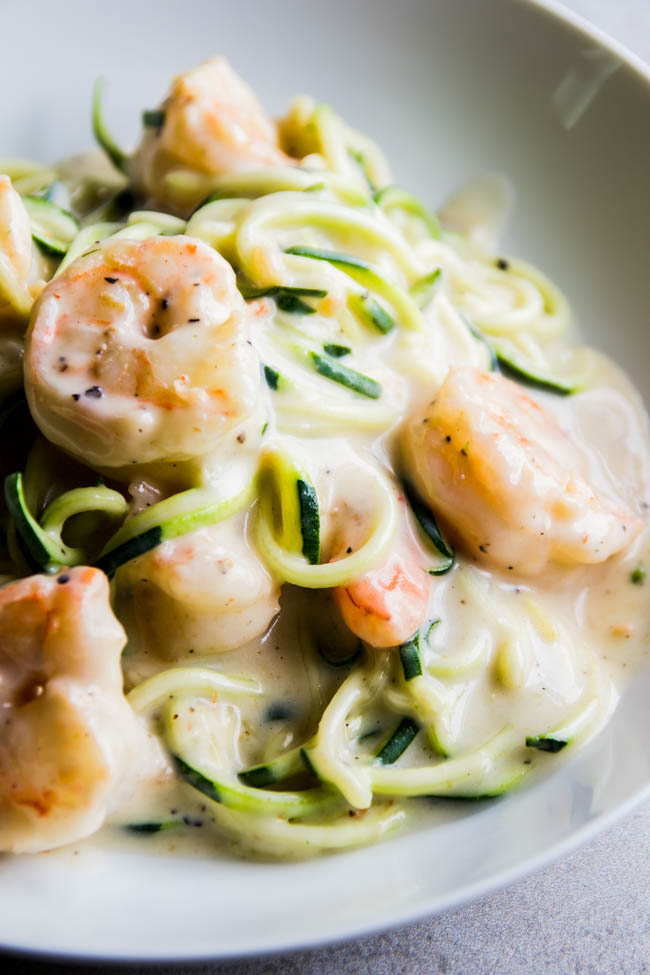 Also, let's dole out some bonus points for this recipe being 1) ready in 20 minutes and 2) clocking in at under 400 calories per serving. Hip hooray for zoodle shrimp alfredo!

ALSO also, don't forget to look for Wild American Shrimp when you're shopping for recipe ingredients (which I know you're totally about to run out and do, because helloooooo, we basically just turned shrimp fettuccine alfredo into health food).

You can read more about why I choose Wild American Shrimp in this post, but here's the short version: It's sustainable, shrimpers are awesome, YAY for supporting local family fishermen, and BOO to the serious slave labor issues plaguing the foreign shrimp supply chain. 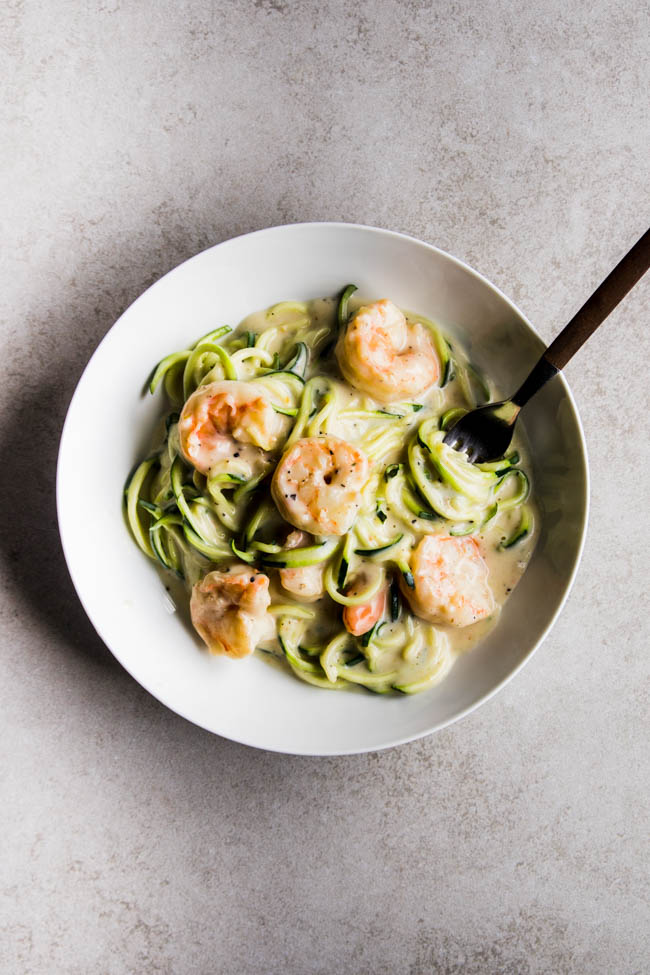 But seriously. That running-out-for-ingredients thing we just talked about?

Do it. Do it nowwwwwww. 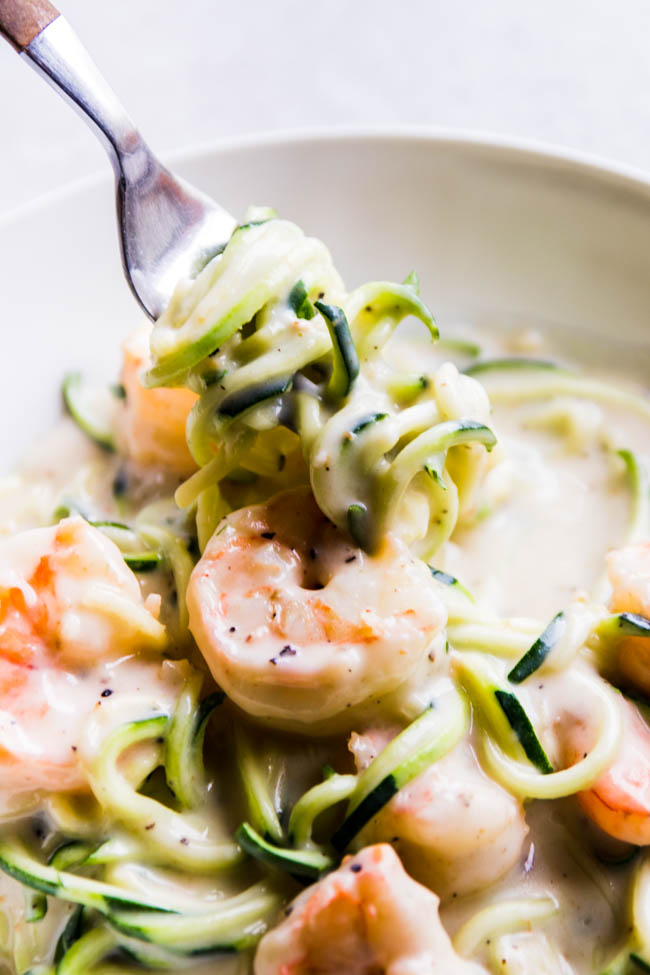 Spiralizing Zucchini: I use and love this spiralizer for zucchini noodles, but you could also use the thin slicer blade on a mandolin OR cut noodles by hand by peeling thick pieces with a vegetable peeler and then slicing to your desired thickness. I resisted the spiralizer for a long time, but honestly, I'm SO glad I finally bought one. We use it all the time and it's super quick and easy (click here to grab the one I use!)

Watery Zucchini Noodles: You'll notice that the sauce for this recipe gets really thick, and it doesn't look like there's a whole lot of it at first. When zucchini cooks, it releases a lot of water - so when you add the zucchini noodles to the sauce, that water will release and naturally thin out the Alfredo to the consistency we want. If you're worried about the zucchini getting TOO watery, you can hit it with some salt and set it in a colander for 15 minutes or so to draw out some of the moisture, and then proceed with the recipe. You could also cook the noodles in a separate skillet, drain any liquid, and then add them to the sauce.

Look for wild-caught American shrimp when you're buying shrimp for this recipe. You can read more about why it's best to buy Wild American Shrimp in this post. (The short version: sustainable fisheries, support local shrimpers, avoid shrimp processed with slave labor).

If you substitute real pasta for the zucchini noodles in this recipe, I recommend doubling the sauce or adding a large splash of pasta water to the recipe as written to thin out the sauce.

Add broccoli, peas, asparagus, peppers, or any other veggies you have on hand to this recipe! It's a great blank-canvas recipe for those clean-out-the-fridge nights.

Zucchini noodles do NOT keep well once they have sauce on them, so plan to eat this all in one sitting or save zucchini noodles separate from any extra sauce if you want leftovers.

Not a zoodle fan? Use half zoodles and half cooked spaghetti if you like.

Lighten this sauce up even more by swapping our favorite Magic Cauliflower Cream for the flour and milk in this recipe!