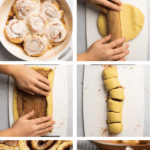 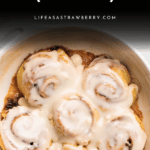 This easy cinnamon roll recipe makes just 6 rolls - perfect for a small group! Ready from scratch in just a few hours. Perfect for holiday brunch or breakfast on Christmas, Thanksgiving, or birthdays!

I've fallen in love with small batch baking recipes lately (Exhibit A: Small Batch Chocolate Chip Cookies) and this easy small batch cinnamon roll recipe is my new favorite thing. They're perfect as a cozy breakfast on Christmas or Mother's Day, but easy enough to throw together any time your sweet tooth comes a-calling.

This recipe makes just six cinnamon rolls: Perfect for a small gathering or if you're cooking for two. It's ready in just over 2 hours start-to-finish, and you can even start the dough the night before to save some time the next morning (we'll show you how!)

We're working with a simple enriched dough here, and filling it with a bit of melted butter and a quick cinnamon sugar mixture. Brush the cinnamon buns with a bit of heavy cream right before baking to help the tops stay soft, and finish with a swirl of cream cheese frosting for the ultimate brunch treat.

A few notes on ingredients

You can see the full ingredients list and exact amounts in the recipe card below, but we wanted to call out a few important details:

Use a kitchen scale.

Measuring by weight (with a scale) is much more accurate than measuring by volume (with cups). If you have a kitchen scale, please use it! (No kitchen scale? Measure your flour with the scoop and level method for best results!)

These cinnamon rolls come together pretty quickly; most of the time is inactive (you're just letting the dough rise!) Here's a bird's-eye view of our process:

These cinnamon rolls have a lot of steps, but we promise they're deceptively simple! Here's our basic order of operations:

Start by proofing active dry yeast - we'll mix it with a bit of honey (which helps speed the yeast activation along) and some warm milk, then let it sit until it's foamy.

Note: Yeast that proofs in warm milk won't foam up as dramatically as it does when it proofs in water (like in our Crusty Artisan Bread recipes). It will foam up a little bit, but mostly, it will just look soft. You shouldn't see any sharp granules of yeast on the surface or around the sides of the bowl - just soft, light blobs around the bowl, with a few larger, foamier areas on the surface. If your yeast doesn't activate and soften during this step, it may be expired, or the milk may have been too hot and killed the yeast (which means your rolls may not rise).

When the yeast is active, add a large egg and some melted butter. Next, stir the flour into your yeast mixture until it just starts to come together, add a bit of salt, and continue mixing until no dry flour remains.

At this point, we like to transfer the dough to a cutting board and knead it for a minute or two just to smooth it out: This makes it a little bit easier to roll out later (and helps keep a smoother, more uniform shape), but you can skip this step if you need to!

Once your dough is mixed, cover the mixing bowl with a clean tea towel and let it rise in a warm place for an hour (I like to place my dough next to the oven or near a radiator in the winter to keep it nice and cozy).

Because this is such a small quantity of dough, and because it's enriched (weighed down by our egg and butter) you won't see a super dramatic rise here - it isn't like artisan bread recipes where you can expect the dough to double in size. The small quantity also means it can be tougher to gauge growth, especially in a large mixing bowl. Look for dough that's puffed up, smoothed out on the surface, and very soft when you press it.

Stir a bit of brown sugar, white granulated sugar, and plenty of cinnamon together in a small bowl. This filling is pretty forgiving - feel free to adjust it however you like! Dial the cinnamon up or down, or add extra spices (we love it with a pinch of cloves, nutmeg, or ginger!)

Fill and roll the dough

When the dough has risen, roll it out into a rough rectangle. Use a rolling pin here if you have it; if you don't, just pat it into shape with your hands like it's pizza dough! (You can add a bit of flour to your cutting board to make this easier if you like - although if you kneaded the dough before its first rise, we find that the extra flour usually isn't necessary! If the dough sticks at all, use a bench scraper to coax it off the cutting board.)

Brush melted butter over the surface of the dough, then sprinkle on your cinnamon brown sugar mixture. Leave a small open strip along one of the long sides - this exposed dough will help you seal the dough once it's rolled up!

Then, it's time to roll! Go slowly, and try to roll this dough as tightly as possible for best results. When you get to the end, pinch the final edge into the log to seal it up as best you can.

If the dough log looks too long and skinny once it's rolled, gently push each end in towards the center to squish it into a smaller roll. You're aiming for a thick dough roll that's about 6-8 inches long.

Time to slice! Slide a long string of dental floss under the dough roll, then pull each end towards the opposite side (kind of like you're tying a knot) to slice the dough. You can also just slice these cinnamon rolls with a very sharp knife! Cut the dough into 6 equal portions.

Spread some softened butter over a small baking dish (or spray it with cooking spray) then arrange the cut cinnamon rolls in the dish, leaving an inch or two of space between each roll. Cover the baking pan with a clean tea towel and let it rise for another 30 minutes while you heat the oven.

Again, you're not going to see a really dramatic rise here - that will happen once these cinnamon rolls hit the oven (thanks to a fun phenomenon known as oven spring, which we talk about in our Everyday Artisan Bread course). After this final rise, the rolls should look a bit puffy and soft, but there will likely still be a bit of space between them.

Time to bake! Brush the tops of your cinnamon rolls with a bit of heavy cream (this will keep them soft and prevent the tops from browning too much!) then slide them into the oven and bake until they're just barely golden brown.

Mix a quick cream cheese frosting while the rolls cool, then pour the frosting over the top and spread it over the rolls while they're still a little bit warm.

This is a great base recipe, and it's easily adapted to suit your tastes! A few of our favorite swaps:

Can I make these cinnamon rolls in advance?

Yes! Mix the dough as directed, then cover with an airtight cover (or a piece of plastic wrap) and transfer to the fridge for up to 24 hours. The time in the fridge takes the place of the first rise on the counter. When you're ready to shape the rolls, pull the dough out of the fridge, let it warm up for an hour or so on the counter, then roll, fill, and bake normally.

Can I freeze extra cinnamon rolls?

Yes! These rolls freeze quite well. Let cool completely, then store in an airtight container in the freezer for 1-2 months. Defrost in the fridge overnight and pop into a 325° F oven for 3-5 minutes to warm the rolls back up when you're ready to eat. We recommend freezing cinnamon rolls unfrosted, and adding the frosting when you reheat them later.

Can I make a larger batch of cinnamon buns?

Absolutely! You can use the 2x or 3x buttons in the recipe card below to scale this recipe.

Do I have to use floss to cut cinnamon rolls?

Nope. It makes them a little prettier, and cuts a little cleaner - which is why I love using floss to cut cinnamon buns for photographs - but it really doesn't matter. If you don't feel like using floss, just use a very sharp knife or a thin serrated knife. The rolls might squish down a little as you cut them, but they'll pop back into shape in the oven. I also don't bother to use unflavored dental floss when I cut my cinnamon rolls - I honestly can't tell a difference, so I just use whatever minty floss I have kicking around in my cabinet.

Can I use a stand mixer?

We prefer to mix this dough by hand. Since we're working with such a small quantity, a stand mixer (whether it uses a dough hook attachment or a paddle attachment) can struggle to pick up and incorporate everything here - you end up spending so much time scraping down the sides of the mixer that it doesn't save you much effort in the long run. Fortunately, this recipe is very easy to mix by hand!

Our Everyday Artisan Bread online course is an incredible resource for all things baking. We go into so much more detail about why and how doughs like this work, and we also have a private Facebook group where our team helps you out with any questions you might have!

Make the dough and first rise

Shape the rolls and second rise

Additions and Substitutions. Use more or less cinnamon in the filling to suit your tastes. Use additional brown sugar in place of the white sugar if you prefer. Use apple butter, nutella, or cranberry sauce in place of the cinnamon sugar mixture. Add a pinch of ground cloves, nutmeg, or ground ginger to the cinnamon sugar mixture if you like. Swap the cream cheese frosting for a bit of maple frosting or plain vanilla icing. Use granulated sugar or brown sugar in place of honey for the dough if you need to. Add chopped toasted walnuts or pecans to the filling for extra texture.

How warm should my milk be? Heat milk in the microwave or a small saucepan until it is warm to the touch - between 95° and 110° Fahrenheit. Use a kitchen thermometer to take an exact temperature if you'd like.

Be sure to read the full post above for plenty of notes, tips, and step-by-step photos!